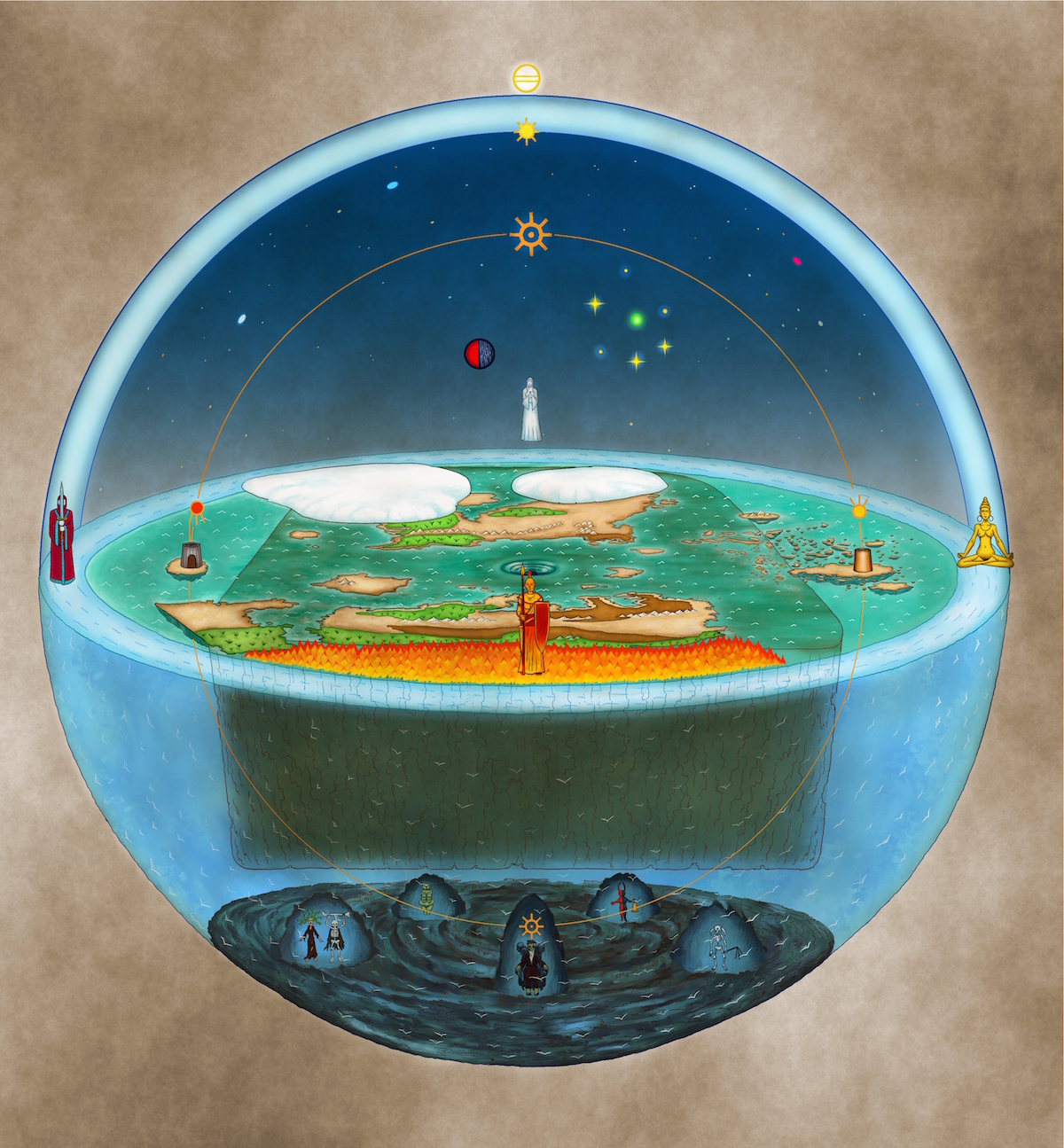 The World of Glorantha

Glorantha is not a planet, as is ours, but instead is a slightly bulging, squarish lozenge, like the Earth Rune’s shape. Glorantha floats upon Sramak’s River, the Primal Ocean that encircles the world. The Sky overhead is an off center bowl rotating about the Pole Star which marks the center of the Sky, and is the only stable point in the celestial dome. Between the Earth and Sky is the turbulent realm of the Air gods. Underneath both Earth and Water is the dark, silent Underworld.

Beneath the Sky and the Air, and sitting on top of the Earth is the Middle World—the realm of mortals. It has a northern and southern continent, and many islands.

Beyond the Middle World, there are lands of immensely powerful supernatural races, such as Altinela, Vithela or Luathela. These beings occasionally come to the world of men, but few men ever travel to them. Some are areas of myth, like the Sea of Fire where the sky fell to earth and set everything burning, or the Lands of Dawn and Dusk where the Sun rises and sets each day. Only Heroes can travel to such realms and survive, and from there they can find their way to the very worlds of the gods.

Glorantha was created by its deities from the Primal Void of Chaos. At first, there was no history, for the initial creation formed the period of magic and timeless simultaneity called God Time. During this time, the entire world was populated with the beings and races of the Golden Age.

The birth into this world of Umath, the Primal Air, shattered the period of peace with crowding, confusion and fear. This escalated into the Gods War, resulting in the death of the Sun, the Great Darkness, and Chaos let loose upon the world. Total Destruction seemed near.

But Glorantha was not destroyed. Spurred on by Hope and Chance, the Seven Lightbringers traveled through the Chaos-ridden Cosmos and, after harrowing adventures, liberated the life-giving Sun God. The joyful god leapt to his rightful place in the sky and the Dark was banished.

To keep entropic Chaos from coming to their realm again, the gods swore great oaths and compacts resulting in the Great Compromise. Men call this Time. By altering the world, the gods saved it, and history began.

Now is the time known as the Third Age; 1220 years after the Dawn, the Red Moon Goddess rose in the region called Peloria, to the north of Dragon Pass. In her were balanced Constancy and Change, Life and Death, Love and Indifference, and all the dichotomies of the Universe, including a touch of Chaos. Her arrival changed the face of the land.

After living in Glorantha a short time she ascended to the heavens where she remains in her cyclical beauty, viewing the land, which she left to her family below. The ever-reincarnating Red Emperor of the Lunar Empire is her son and her pride.

The Lunar Empire expanded from its founding. When defeated it rebounded stronger than ever. They went north to the icy wastes, east to the bounds of the horse barbarian lands, and west until they were halted by the magical Syndics Ban. But in the south the empire continued to grow and grow, pushing it inevitably towards Dragon Pass, where your characters’ ancestors dwelt. During character creation, we will explore what became of them in their wars against the Lunars, and how your family fares today.

Glorantha is a Bronze Age world. This general statement is meant to illustrate the social development and cultural level of most of the people of the world. Bronze is common, and can be mined directly from the bones of the gods who died in the Gods War. These bones provide a ready source of the metal. Bronze is used throughout the rules to refer to the terrestrial metal to which it is most similar, but it also has some properties that are dissimilar from our earthly metal.

Unalloyed, or pure, metals, such as iron, lead, tin, and copper, prevent a person from using magic unless they are “sealed” to the Rune connected with that metal. Note that all coins are alloyed, as are gold and silver ornaments.

Glorantha is a Bronze Age and early Iron Age world. It has far more to do with Mesopotamia, ancient China, Homer’s Greece, Howard’s Hyboria, and the Shahnameh than it does with medieval Europe, Le Mort D’Arthur, or the Carolingian Cycle. Its heroes are the like of Conan, Gilgamesh, Heracles, and Rustum, not Lancelot, Percival, and Roland. Unlike some fantasy settings, there is no alignment, as such. People have allegiances to nations, cities, religions, and tribes, not to abstract concepts. It is also possible for people within the game to survive quite well with no allegiances whatever except to themselves.

In Glorantha, the gods, in the forms of their followers and cults, play an active and important part in most major events. However, most gods are complementary, and rarely oppose each other directly. Only the gods of Power are actively antagonistic; and even then only within their own spheres of interest.

The Runes are the building blocks of Glorantha. They are symbols, archetypes, embodiments, and the actual matter and energy of the world. Runes originated with the very creation of Glorantha. The Runes are more than just written symbols. When a Rune is written or inscribed, the real power of the magical image is present within it. Repetition of a rune does not weaken it, but strengthens its presence and firm reality in creation. Their precise origin is unknown, and followers of particular runes always insist that theirs was first-made. Tales link the gods of the Celestial Court with the Runes, each god embodying a Rune. Their interactions led to the births of the Young Gods; these newer deities are often associated with one or more parental runes as a result.

Each Rune has myths associated with it. Some have elaborate cycles woven around their stories. All begin with a member of the Celestial Court who owned the Rune, and end with the Great God who currently owns it. In these stories the runes are sometimes treated as things, or beings, or abstract powers, or even all three.

Guide to the Runes 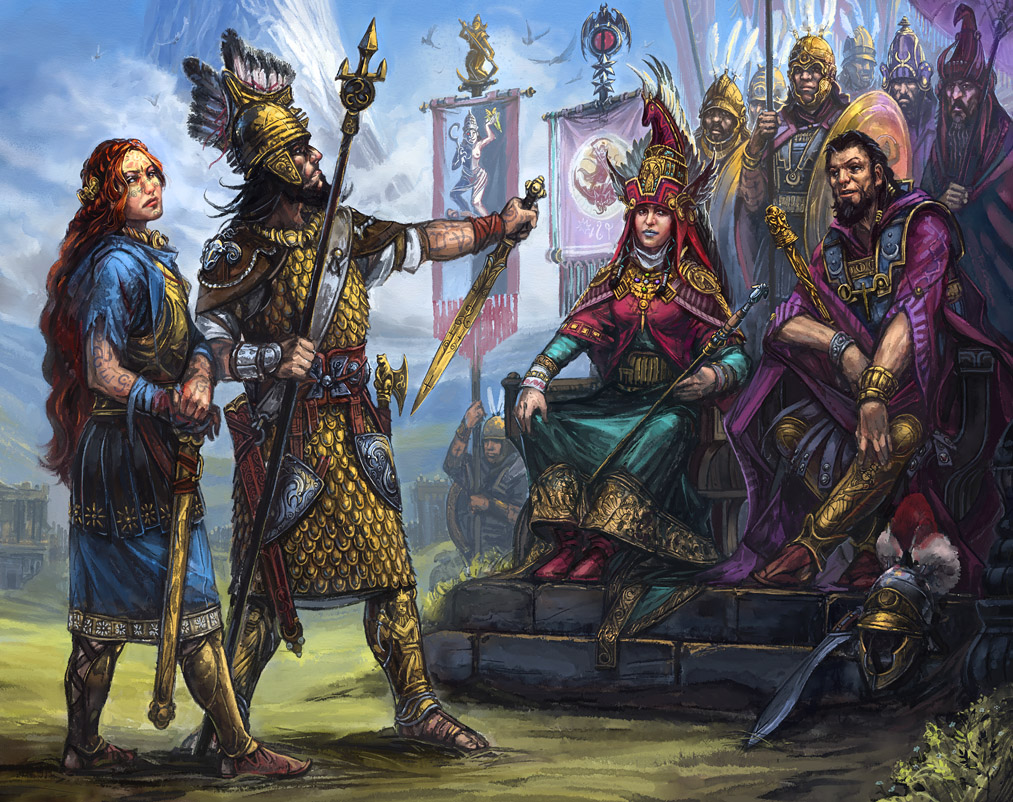 Dragon Pass is probably the most important place in Glorantha, sitting at the crossroads of the continent of Genertela. The actual Dragon Pass is a narrow valley near Mount Kero Fin that crosses the continental divide, but over the centuries the name has come to be applied to the whole 140-mile gap in the Rockwood Mountains and to the region around this gap. The Dragon Pass region is large, perhaps 40,000 square miles in total area, even bigger if its boundaries are determined liberally.

Dragon Pass is one of the most militarily significant regions in Genertela. It offers the only passage suitable for large, heavily encumbered armies through the Rockwood Mountains, which extend unbroken for roughly a thousand miles to the west and about 625 miles to the northeast. The region contains much easily defended terrain, such as forests, hills, and mountains. Most importantly, its warlike population and many magical entities make it a daunting region for any army to pacify or conquer. For more than a century, two Orlanthi kingdoms have divided Dragon Pass: Tarsh in the north and Sartar in the south.

Much of Dragon Pass is hills and mountains, but its many valleys are fertile and rich. The area is well-watered, warm in summer and cold in winter. Most of Dragon Pass is over 2,000 feet above sea level, and notorious for its destructive storms and violent winds. Mixed forests and rough grasslands cover most valleys and foothills, except where people have cleared them for farming.

To the south of Dragon Pass lies a magical land called the Holy Country, or Kethaela, long united by its God-King, who swam ashore from the forbidden oceans. Many nations exist in harmony in this land, drawing on the ancient knowledge of the west, the east, and the north, and from far beneath the earth. The ancestors of the Sartarites came from the Holy Country, and the region is dominated by Esrolia, one of the richest and most densely populated areas in Glorantha.

To the north of Dragon Pass is Peloria, dominated by the Lunar Empire, the most powerful state in Glorantha. A son of the Red Goddess called the Red Emperor rules the empire as a demigod. The Orlanth hill tribes of south Peloria, including Tarsh, have all been conquered by the Lunar Empire and are ruled by puppet-kings.

To the east of Dragon Pass are the plains of Prax, an arid chaparral land inhabited by the Praxian Animal Nomads. In the Golden Age, the land was fertile and pleasant, but was so badly wounded during the Chaos Wars that now little will grow there, even though great amounts of rain may fall during Dark, Storm, and Sea seasons. Little rain falls the rest of the year. The surface of the land is hard clay and sand, and the water runs off or goes underground and is lost to the inhabitants. Travelers frequently will see river-courses, but only a trickle of water will be in them. By Fire season, the number of streams flowing in Prax can be counted on one hand.

by: sirlarkins
See All Pages

I'm sorry, but we no longer support this web browser. Please upgrade your browser or install Chrome or Firefox to enjoy the full functionality of this site.